Getting your bike on the Amtrak train isn’t as easy as it sounds. Yes, it is easier than it used to be but is still really confusing. First you have to find out if the station you want to leave from has roll on, roll up or requires the bike to be boxed. We find that on the Amtrak  from Grand Rapids to Chicago you have the roll up option. Great! We will just roll the bikes up to the side of the baggage car and lift them up to the Amtrak employee in the baggage car and he puts the bikes in a rack on the car. That’s pretty cool, we can do that.

So, we make it to Chicago. Now  we have to get the luggage off the train and go back to the baggage car and get the bikes. Then we have to go to the terminal and buy a bike box and pack the bikes in the boxes. The train from GR won’t take a bike box, but to get them on the train to Portland they have to be in a box. Good thing we  have a 5 hour lay over in Chicago to box  our bikes. To fit the bike in the box you have remove the pedals and turn the handle bars sideways. And maybe take the front wheel off if the bike is to long for the box.  Now if you wanted to go from Chicago to Spokane you can just use the roll up service and just hand your bike up to the worker. But the train splits up at Spokane and some of it goes to Seattle (which does not require a box) and some of the train goes to Portland (That part of the trip does require a box ). Easy peasy.  Confused so far?

Now, to make it even more perfect, Amtrak is trying to update their equipment all the time so all of what I just said could go out the window. They said the reason I have to box them is that the part from Spokane to Portland does not have the proper equipment to do it. I’m guessing they don’t have racks in the baggage car for the bikes yet. Seems like you would want to have that equipment going to the biggest bike friendly city in the U.S. 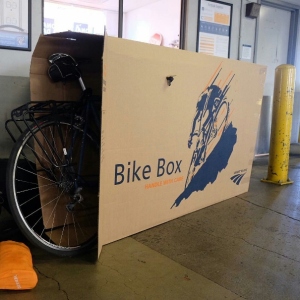 Also on some parts of the route you have the roll on option where you roll the bike on the train car and put it in a rack your self. This option  seems to be more on the East coast, but you can find it at various places around the country.

It seems that Amtrak is trying to be more bike friendly and accommodate bikes, but they have a ways to go I think. Even with all  of the hoops to jump through I can’t wait to get going. It’s all part of the adventure.

2 thoughts on “Not so easy rider”