I am planning a ride from San Francisco to Pueblo Colorado. Kind of warming up this wordpress thing to see if I still know how to use it.

A friend, that Deb and I met on our 2017 Trans American ride, are getting together in San Fran and intend to ride, roughly, from there to South Lake Tahoe and then catch US 50 across Nevada to Utah. Continue across Utah into Colorado to the SE corner of CO . The route is called the Western Express Route.

I will try to write something on this blog every now and then if you want to follow along. We’ll be starting around 7 7 20

We had heard so much about the church hostel in Sebree we rode a short day just to be able to stay there. Again, a very hot day, passing so many chicken growing places, not really farms, just pole buildings with no signage or windows. Just chickens. Grain trucks passed us all day and we rode through gently curved roads in farmland for miles. 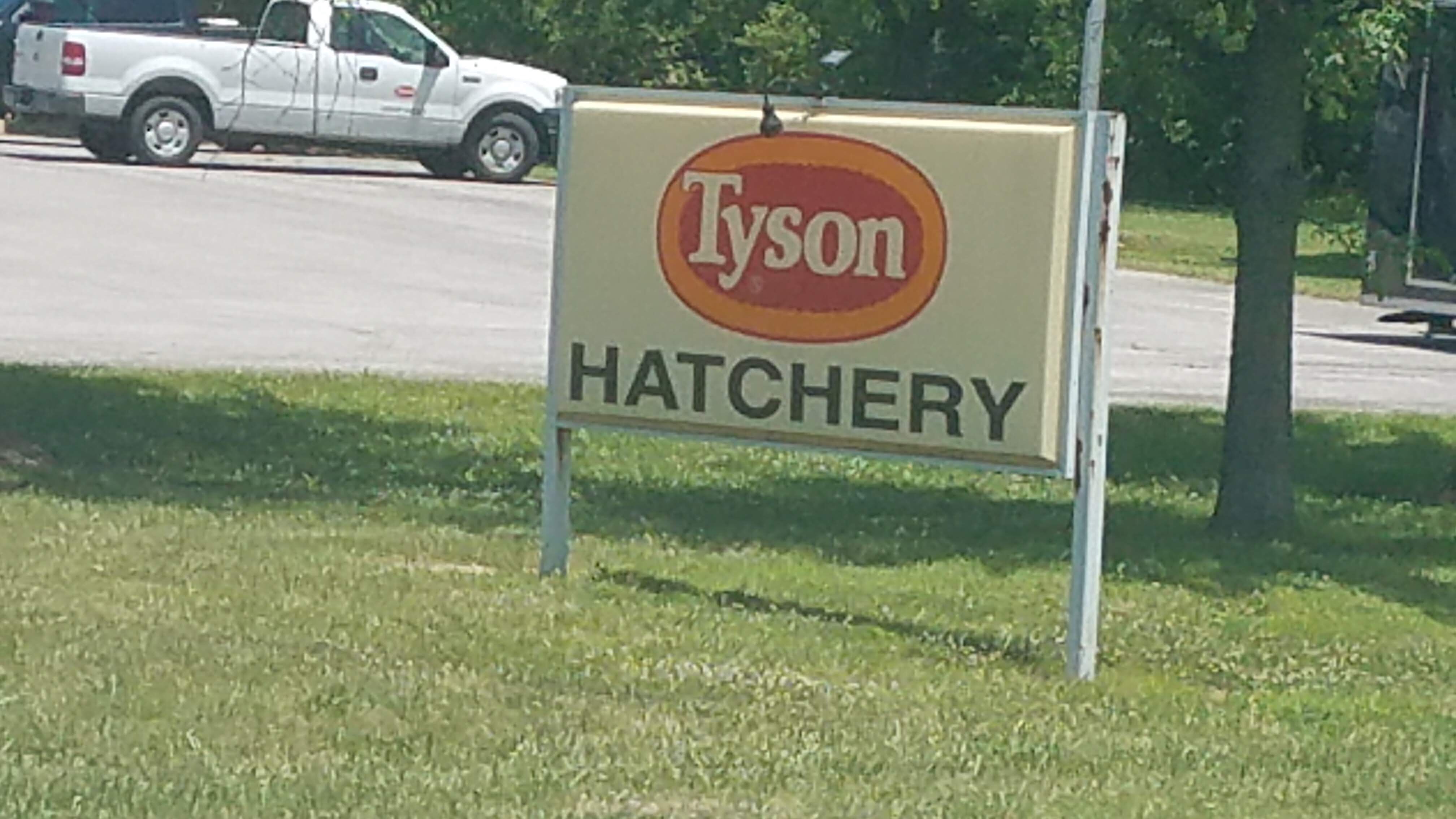 It was so hot, and after passing all the chicken buildings I could not look at another poor chicken tender. We did have a fun conversation with the farmers at a table in one gas station, this station being their “third place” a pub or church of sorts. People are curious about us, and we are curious about them.

Sebree church was just a little amazing. The pastor lead us to a downstairs room in the church with rooms, cots, fully stocked refrigerator, showers, maps, air conditioning, big screen tv..anything a cyclist could want. We shared the space with another couple about our age with the same interests (so fun) and another Transamerica racer. It was fun to watch that guy eat. Mike and I had our own room with cots and a delicious home cooked meal. This is the life.

Honestly mid Kentucky is starting to look all the same, but we are enjoying ourselves immensely. 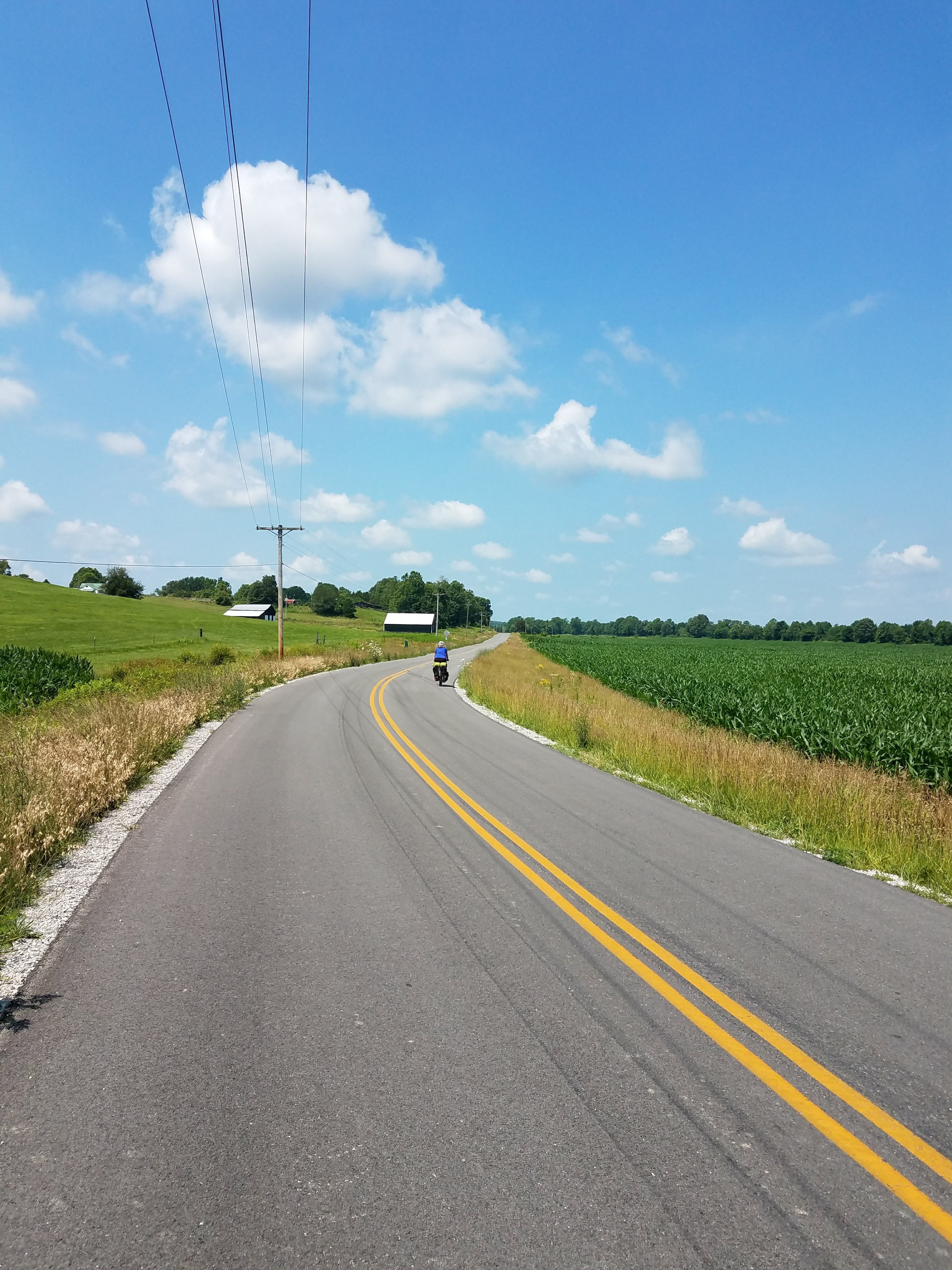 We are quite inventive when it comes to beating the heat, diving into the
c stores often and drinking tons of water. It was 102 degrees today, so we left early to beat the afternoon rays, riding into Utica at about 3pm.

Once again we found the fire station open to cyclists so we found a corner to camp in and soaked up the air conditioning.

A shower and kitchen was available, a few sofas and tv. Utica offered no cafes or restaurants so we walked across the road to enjoy some gas station chicken tenders..every station has them as this is big Tyson country. We are nearing the state line and we honestly get a little giddy seeing the new state sign.

We fell asleep listening to the volunteer firefighters having their monthly meeting a few yards from our heads. A few Transamerica racers popped in for a quick shower, some food and a quick nap, these guys are true animals! Up early again and off to Sebree!

The day started out very pleasant, a peaceful ride through beautiful farmland, on a gorgeous Sunday morning.

By the afternoon it was again hot, windy and muggy.

We had been traveling through many dry counties and it being Father’s Day I knew Mike might want a beer. We we passed a barn where there was obviously a few guys enjoying some beers, I pulled in and asked if I could buy a few from them. Of course they were happy to oblige and were interested in our adventure. We left the barn with a handlebar bag filled with the best they offer, bud light, and that was my gift to Mike for Father’s Day!

We were headed to the Falls of Rough, and were excited to stay in the cabin they advertised, to relax in the pool and sit in the restaurant after another tough day on the bike, but when we arrived it was a ghost town with two teenage kids running it, no pool, no kitchen, no internet.

The cabin was adorable, but there were no falls just a creek. We had planned on eating there so we were low on supplies and we convinced the poor employee to make up a burger, which he did. He was dealing with an absentee owner and was in over his head!

We did sleep very well, as we were all alone in the resort. An experience I am sure we will laugh about someday!

We packed up and moved on towards White Mills, a small four corners town with a gas station. Such a hot and muggy day, over 100 degrees again but relatively flat. The scenery is nondescript, but maybe I just thought that because it was so much corn and heat.

We arrived at the Fire Department early in the afternoon and appreciated the cooler of ice water the department left us. These people are just so good.

A few of the transamerica bike racers stopped in for a break (they rarely sleep) and that to us is always exciting as they are celebrities in our minds. 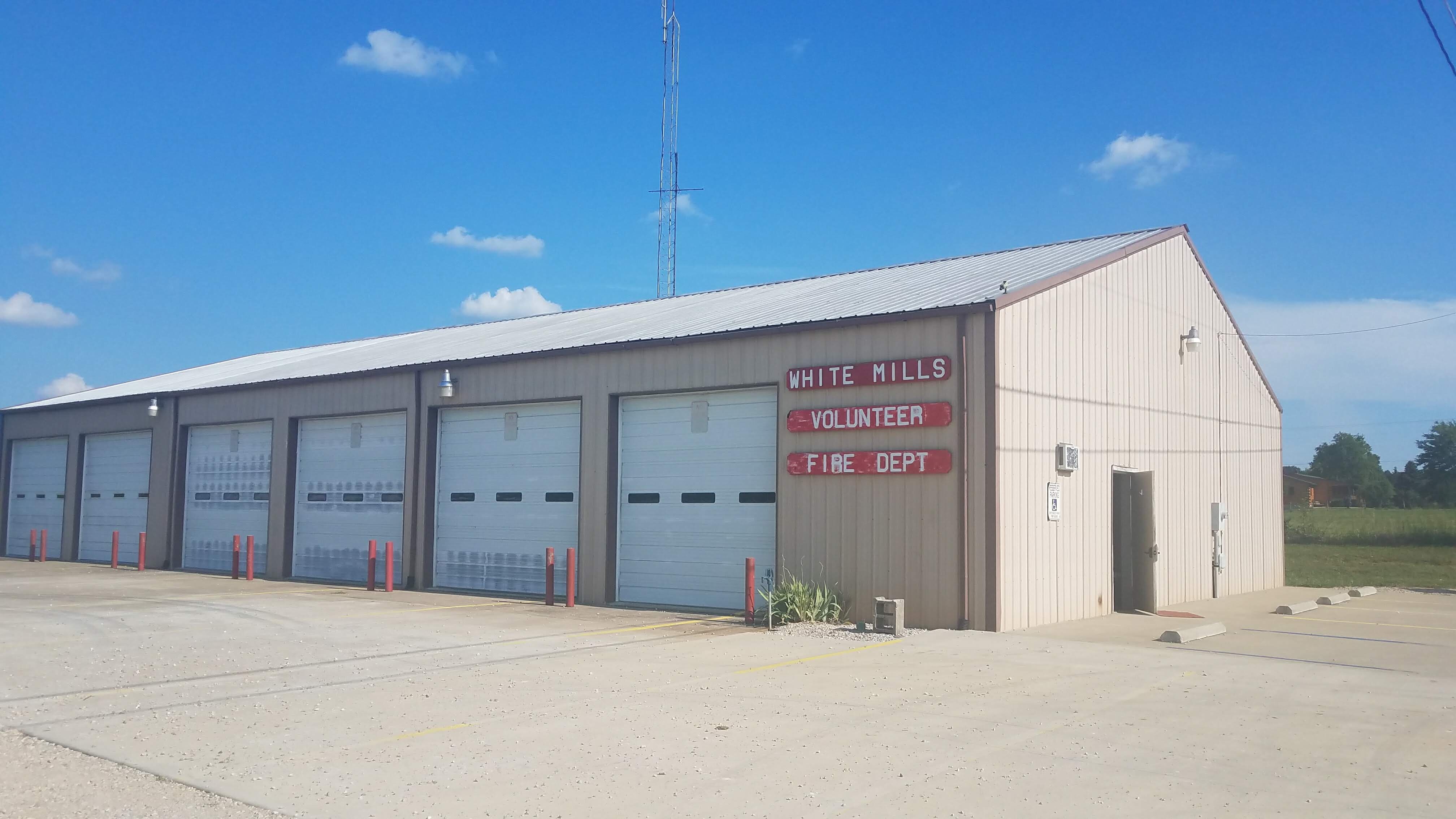 We showered, cooked some ramen noodles and set up our sleeping bags next to the fire trucks and read ourselves to sleep.

It is now September and Mike and I are headed to a new bicycle adventure. I often will run into friends and they ask if we finished our late spring ride across the east coast. Who knew anyone was reading! For our own memories sake I pulled out my diary and will finish tales of that adventure before I start the new one.

June 14. We headed off route to visit the so called bourbon capitol of the world, Bardstown. It was international Bourbon day and we had heard there would be lots of shenanigans going on, Although it was just a short 24 mile detour in 90 degree heat we had to endure very busy roads. 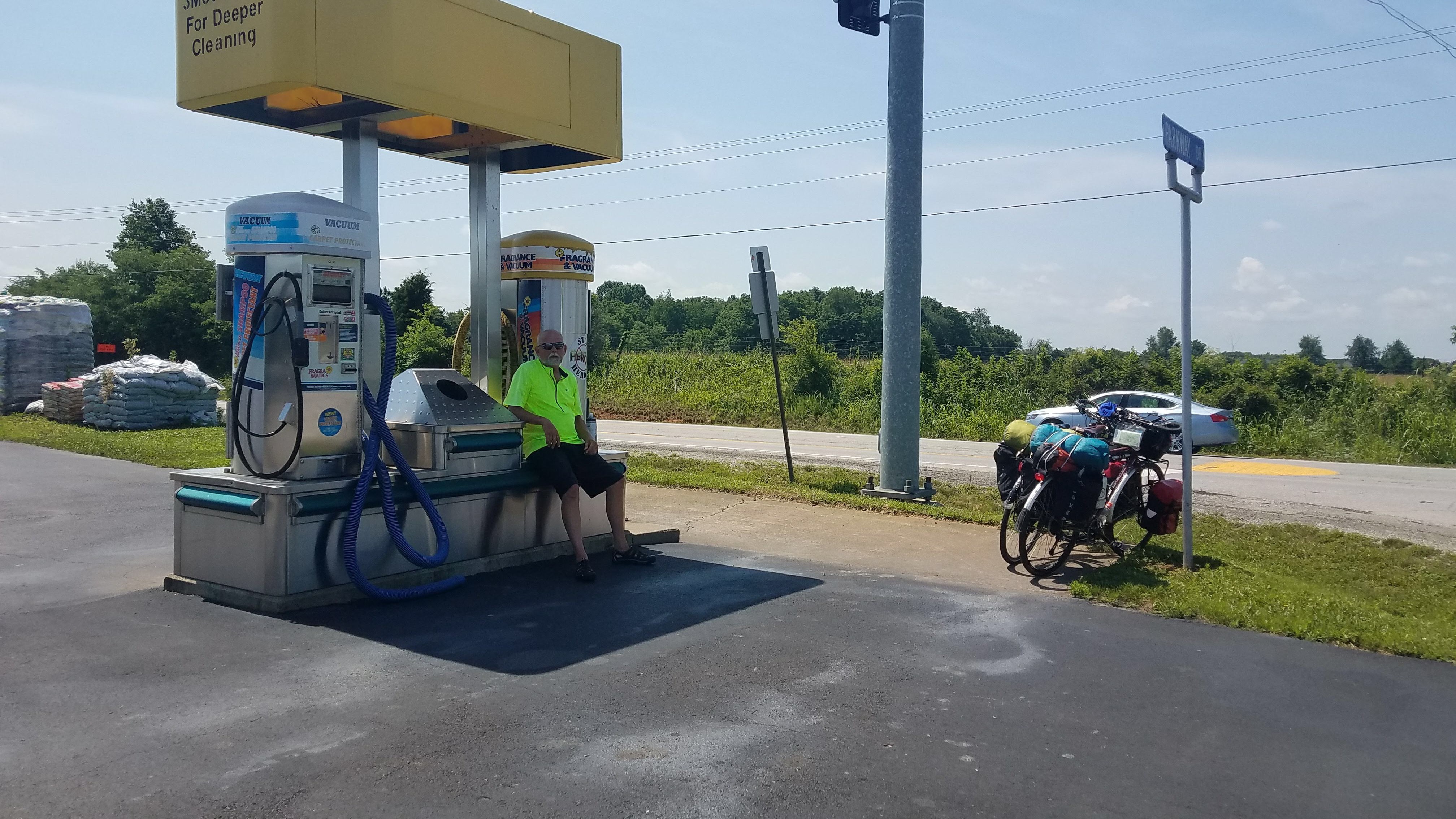 We were happy to find a hotel with an outdoor pool which we loved that first afternoon, and after a good cool down we cleaned up and headed into town. They claim to be “the most beautiful small town in America” but Mike and I knew immediately they have nothing on our Saugatuck! The Main Street was bars and antique stores, all geared toward tourism and bourbon. It is the second oldest town in Kentucky and home to “My old Kentucky Home state park”

Dinner that night was at the Old Talbot Inn, built in the 1700’s and reported to be haunted. We had a front row seat to a blind bourbon tasting competition and some fine blues music before we pedaled back to our hotel.

June 15 we thought we would tour some world class distilleries. 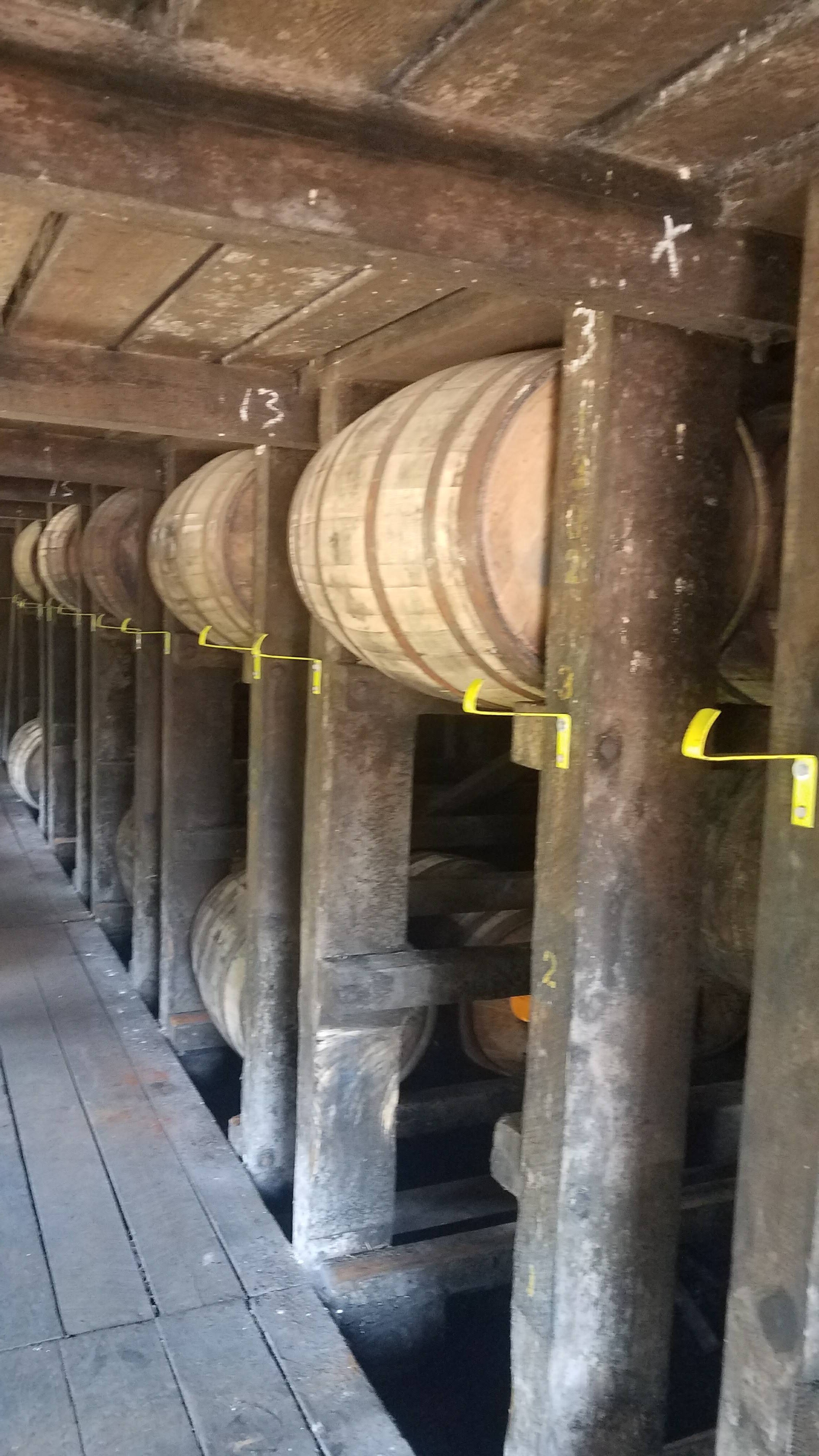 Though we are not bourbon drinkers, the ancient and time honored tradition is fascinating and the corn used by these distilleries are grown in the fields outside of town. We visited the Barton 1792 distillery (which incidentally has a storage facility collapse on June 22, losing 9000 barrels of booze, then another collapse on the Fourth of July losing another 9000)). After the tour we visited the Bourbon museum and went back to the pool. Good day.

A short 30 mile beeline to Springfield today so we can head off to Bardstown tomorrow for a few days, a very cute tourist town filled with civil war history, distilleries, and very old Catholic churches.

Our road was straight with wide shoulders and not much to see,

so we just rode fast. Springfield is just a small town with a dollar store and subway, we will get up early to find interesting things.

One thing I really learned today though (again). I wasn’t hungry at breakfast and thinking it was just 30 miles I thought I would find something up the road and there was nothing! If you want to learn how food fuels your body go for a long bike ride and experiment! I bonked and should have known better.

What a great day for riding a bike again! We went off route, Danville looked like a cute town to visit, and we found ourselves on the most deserted country roads with rolling hills, and beautiful landscapes with friendly dogs even!

We stopped for lunch in the small town of Lancaster and just as we rolled in church bells were playing “Great is thy Faithfulness” and it filled the whole downtown square.

After lunch we turned onto a very busy road.

For fifteen miles we had to pull over and let trucks pass, that on top of black skies kept us moving. 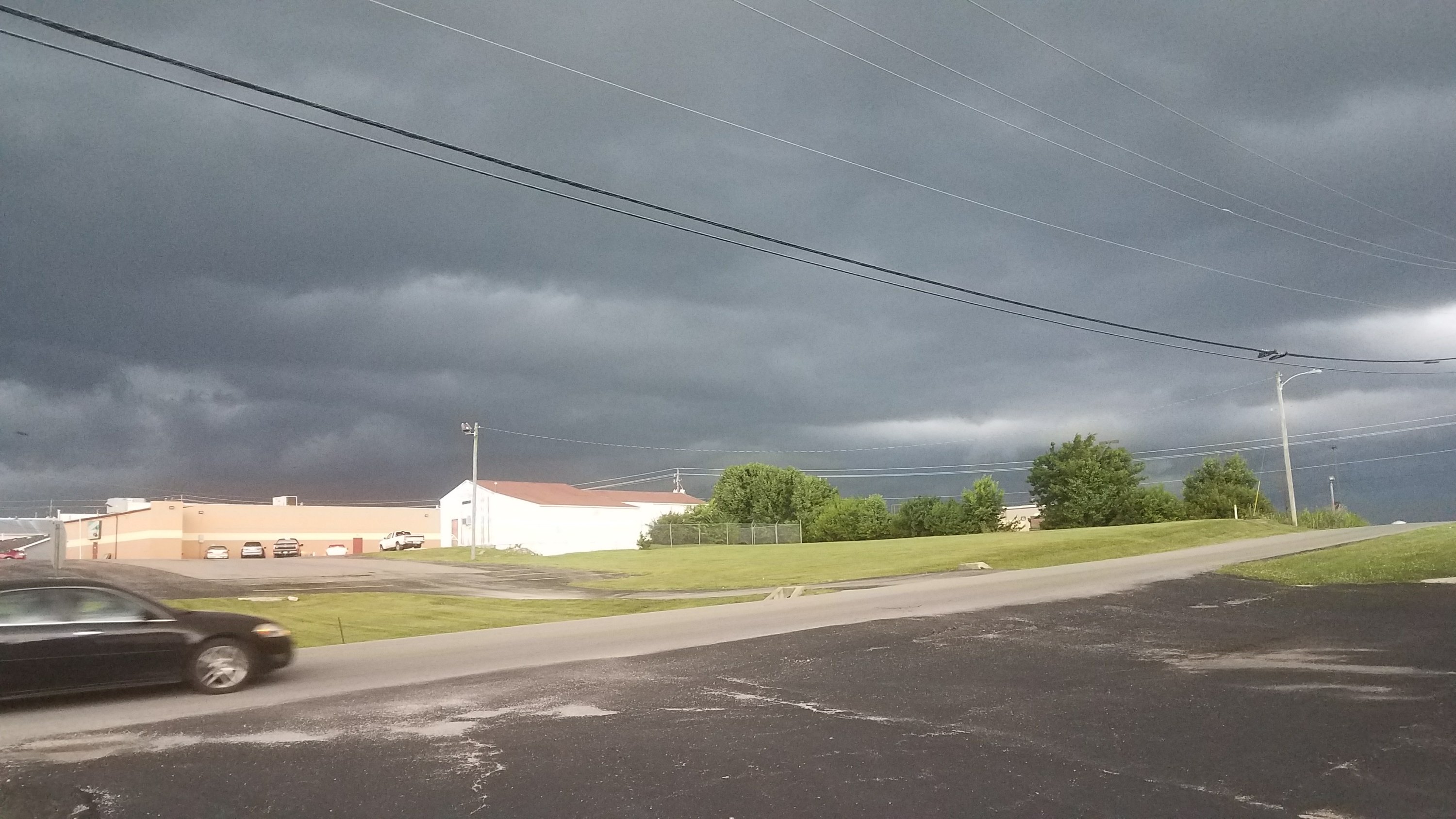 We are so enjoying the gentle hills, what a pleasure. We found our hotel and once again watched a huge storm roll in.

We headed out today for our last day in the Appalachian Mountains. There was still a lot of climbing, but 1000 feet less than yesterday. Dogs were a huge problem today, perhaps ten dogs chased us in all. Really amazing, I find yelling at them still is the best deterrent, but one dog would not give up. I pulled out the mace and he seemed to know what that was! 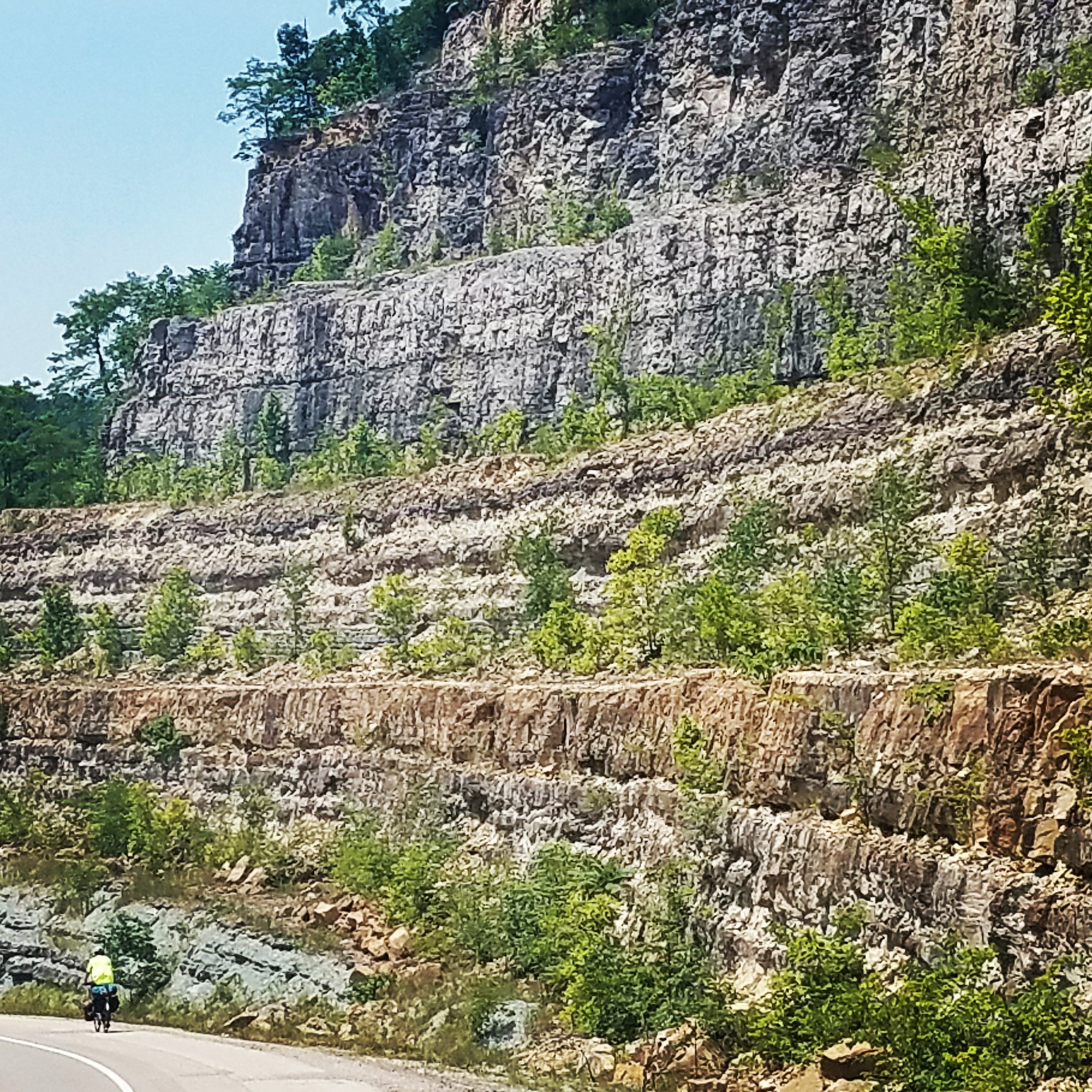 The roads were unusually narrow and busy so we were on high alert all day for that as well, but it was a satisfying ride and we were looking forward to visiting Berea and the unusual college there.

We arrived in Berea about 4pm and checked into the historic Boone Tavern and Hotel (really just a hotel).

After cooling off and cleaning up we had a light dinner and our first beer in a week, as most of eastern Kentucky is dry. Eager to explore the college the next day.

Berea is named after a town in the Bible whose residents were said to have open minds, as the founder of this college was a great crusader against slavery. He wanted a college that would include people, regardless of creed or color. (imagine, that was “openminded”) The college does not charge tuition, the students are required to take part in a work program. Traditional crafts are taught at this college, weaving, pottery, quilting, and basketry.

We spent the next day visiting the workshops of the students and the shops which sell their wares. We rode around the campus, hit the local bookstore and yarn shop and broke out the next map for our adventure into bluegrass country.

We started the morning going through road construction which was actually pretty amazing to observe.

Heavy blasting shook the area for miles around.

Mike and I love that stuff. We were forced to walk our bicycles as traffic weaved around us, not so fun, but before long we had wide shoulders to ride on for a few miles! We have had no shoulders to speak of so far in Kentucky and in fact the rumble strips force us into the road most often, we don’t like it, and neither do the drivers!

We had a good day, it was hot and hilly again, but it is part of the adventure. We passed through Daniel Boone National Forest, 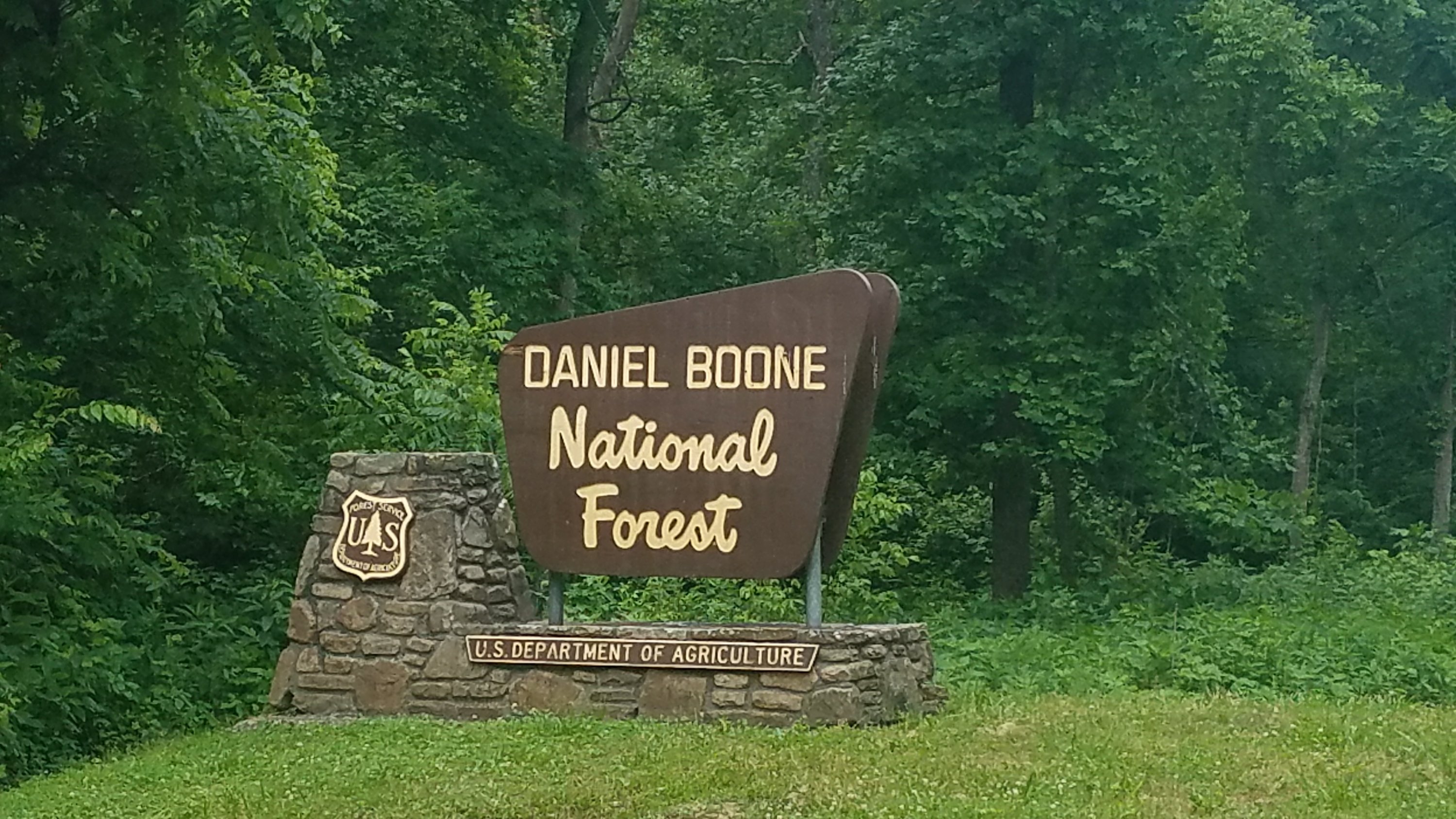 At one point in the afternoon I heard a cow moo and I shed a tear (of joy).

This meant we were leaving coal country and the mining economy and were headed to the farming-oriented economy again.

We arrived in Booneville around 4pm and found a church which allows cyclists to camp behind it. They provide an outdoor cold shower and outhouse as well, pretty good after a long ride. The rain started just as we got off our bikes.

We were all alone back there when a man rode up on an old bike and just sat down at on the picnic table without speaking. We tried to make conversation but he was pretty silent. He finally asked what our bikes were worth. “not much” said Mike. “maybe a few hundred” .

After an uncomfortable half hour watching us, he said goodbye, Mike and I looked at each other and…locked our bikes.