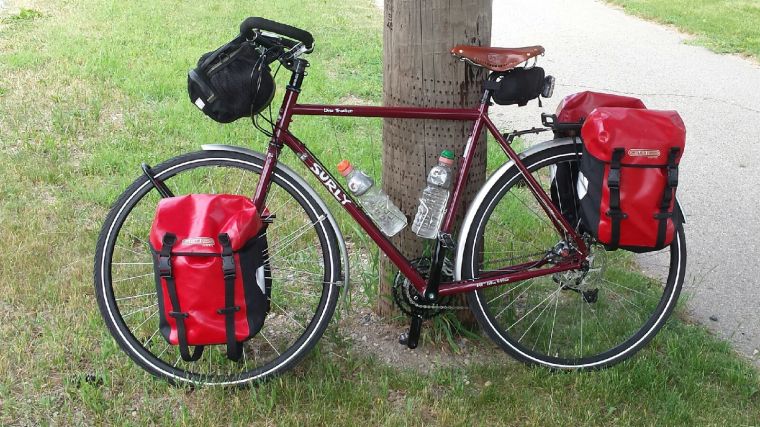 It took me a while to figure out how to get back to this blog. Shall we say technology is not my friend.

I’ve been working on the bikes getting them ready to make the 4200 mile trip. Deb is going to ride her Cannondale SR-800, she has had for a long time. She is one with her bike. The wheels that came with the bike only have 16 spokes per rim and we have had some issue with breaking spokes in the past. So I ordered 2 new rims from Velocity with 32 spokes each that I think will be stronger. I put  two new tires and tubes on it and a new rear cassette, along w/ a new chain. There were some options for what gears to use. Knowing we were going to ride some mountains I chose the cassette with the biggest number of teeth on the low gear that I could get. What is called an 11-28 set. Also the bike got a new small chain ring on the front crank set. It had a 30 tooth gear and I went with a 26 tooth gear to give a lower “granny gear’. Over the years of riding Deb had tried a few different saddles on her bike and found that the Brooks women’s is what works for her. We’ve also raised the handle bars up a bit so she isn’t leaning so much forward. We also added a rear rack for carrying panniers.

I bought a new bike for this trip about a year ago. Yes I’ve been thinking about this ride a long time. I got a Surly Longhaul Disc trucker. It is a bike made for this kind of loaded  touring. Of coarse, if you know me, you know I like to tinker with things. So I changed the handlebars and the stem and the shifters and the brake levers and the tires. I added fenders and racks and front and rear lights. Other than that it came with everything I wanted. No one ever said hobbies were cheap.

5 thoughts on “It’s about the bikes”