The lure of the coast is hard to get away from. So much to see. We rode around a large estuary with lots of water fowl to look at. So interesting to see what is uncovered when the tide goes out. Rode into Neskowin looking for a cup of coffee and a snack. Found a nice place where we were right next to a farmer’s market. Lots of homemade food, but alas, we haven’t enough room to carry anything.

After we has checked out the town we mounted up and headed out. Good thing we had read the addendum to our maps. There are two Slab Road exits from Highway 101. We needed the 2nd.  Slab Road was both beautiful and creepy. 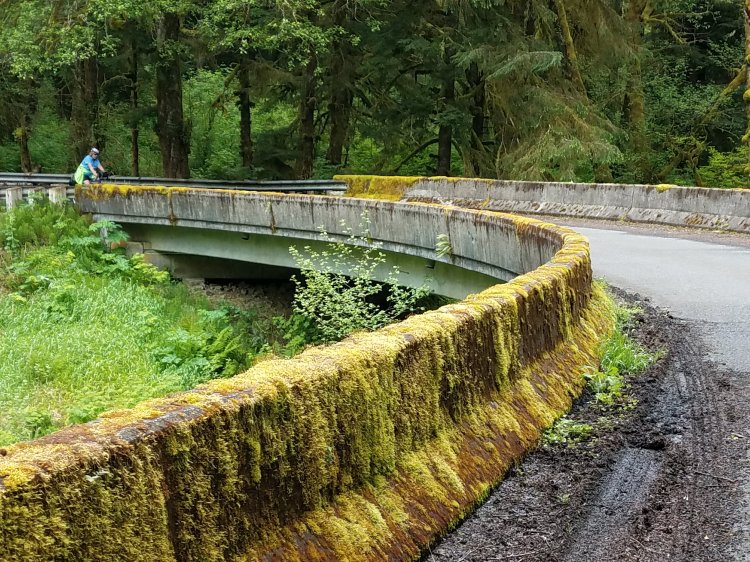 It is kind of rain forest-y, with moss on the trees and very green and thick foilage. When you stopped for a drink it was dead silent, creepy. I must have too much time to think while I’m riding.

I started to think this place would be where some movie starlet would be lost and some bad guy would be chasing her, while some handsome good guy would be trying to rescue her. Yeah it was that kind of a woods.

We stopped again in Otis for a snack. The best Cinnimon roll ever. I like how I can eat every two hours:

We finally made it to Grand Ronde. Basically a Casino with a few other business around it, in the middle of nowhere.

Not far from the casino we found a campground and set up for the night. We caught the shuttle to the casino (they really want you to go there) where we walked around and ate. We aren’t gamblers so we found it quite boring and went back to camp pretty quickly. I think I’m gonna dream about damsels in distress hahaha.

4 thoughts on “Beautiful and creepy”